TRUCK ACCIDENT.  An SUV rear-ended a broken down tow truck, killing one woman in the SUV and sending her husband and two passengers to the hospital.  The truck accident occurred…
(218) 847-5644Free Consultation

TRUCK ACCIDENT.  An SUV rear-ended a broken down tow truck, killing one woman in the SUV and sending her husband and two passengers to the hospital.  The truck accident occurred about 9:00 p.m. on January 22, 2022, near Tower City, North Dakota.  The SUV driver and two passengers were hospitalized with serious injuries.  The tow truck was unoccupied at the time of the accident.

At the time of this truck accident, there was scattered ice in the roadway in that area.  Roads were not covered in snow at the time of the crash, a North Dakota State Patrol official said.

Truck Parked in the Driving Lane before Collision.

After the tow truck broke down, the truck driver called another tow truck.  However, a passing motorist gave him a ride away from the scene before help arrived.  Inexplicably, the tow truck driver left the broken-down tow truck in the driving lane of I-94, according to the patrol.

A front-seat passenger in the SUV, a 43-year-old mother of four daughters, died at the scene.  Additionally, the woman’s husband and two passengers, a 14-year-old girl and a 9-year-old girl, were taken to Sanford Medical Center in Fargo to be treated for serious injuries, the patrol said following the crash. 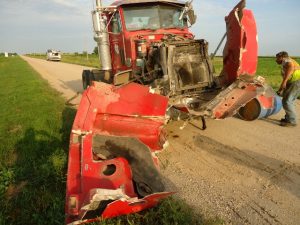 The tow truck was parked and unoccupied in the right lane of I-94 westbound at the time of this fatal accident, and it was unknown what, if any, emergency lights were activated on the disabled truck at the time of the this truck accident.

Complicating the investigation, at an interview in the hospital, the driver of the SUV said that before the fatal impact he heard/felt his phone vibrate, and he looked down “for a second” to see what the notification was for.  When he looked up, the tow truck was directly in front of him, and the SUV and truck crashed.  There was no evidence at the scene of braking having occurred.

The family was traveling from Monticello, Minnesota, to Bismarck, North Dakota, when the SUV accident occurred, according to the ND State Patrol.  The State Patrol sought information pertaining to the SUV driver’s phone use from 5:30 p.m. to 9 p.m. on Jan. 22.

Note: This is an excerpt from an original article that ran online at in-forum.com on February 8, 2022.