Teens “sort of” don’t text behind the wheel or drink and drive.

Teen drivers know, but ignore, the dangers of drinking and driving or texting behind the wheel.  It looks like many teens do not understand what it means to drive safely.…
(218) 847-5644Free Consultation

Teen drivers know, but ignore, the dangers of drinking and driving or texting behind the wheel.  It looks like many teens do not understand what it means to drive safely.

That kind of confusion can be a bad thing, given that a quarter of fatal crashes involving young drivers result from drinking and driving. 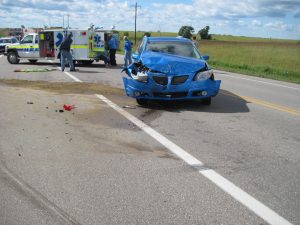 “The good news is that a very high percentage of young people are aware,” says Stephen Wallace, the CEO of Students against Destructive Decisions (SADD), a non-profit that aims to help teens refrain from underage drinking, drugs and impaired driving.

“The bad news is they’re sort of casting that aside and doing those things anyway,” he says.

The survey, which was commissioned by Liberty Mutual Insurance and SADD, included over 2,500 11th and 12th-graders from around the country and 1,000 parents of teen drivers.

Teen drivers do what their parents do.

The results indicate that parents should talk to their teens and make sure that everyone is on the same page when it comes to safe driving, Wallace says. Parents also should keep in mind that teens tend to mirror their behavior.

An earlier survey that Liberty Mutual and SADD commissioned in 2012 found that teens tend to copy what their parents’ model, and take note when their parents break the traffic laws.

Lessons about drinking and driving tend to come with age, says David Melton, a managing director of safety at Liberty Mutual. But texting and driving is common to drivers of all age groups.

Drivers in Detroit Lakes and Fargo are no exceptions to these findings.  A car accident is as likely to be caused by texting behind the wheel in Fargo, North Dakota, as anywhere else.  Teen drinking and driving in Detroit Lakes, Minnesota, is still a problem.  If you have questions about an injury accident, contact a Minnesota personal injury lawyer (and our Fargo personal injury attorneys) at the Stowman Law Firm, P.A.